With all of the games coming out in October, it might surprise people that the October release I’m looking forward to the most is a documentary called Talking With Gods

, has been a persistent source of inspiration for me over the past 15 years. The Invisibles is a magick spell disguised as an action, conspiracy, horror and counter-culture comic.

Yes, you read that correctly, a magick spell:

Morrison taught me to look deeper, reminded me to dream and opened my mind to the power and potential of media.

Talking with Gods is a deeper look into Morrison, his life and his work and to say I’m looking forward to watching it is an understatement. 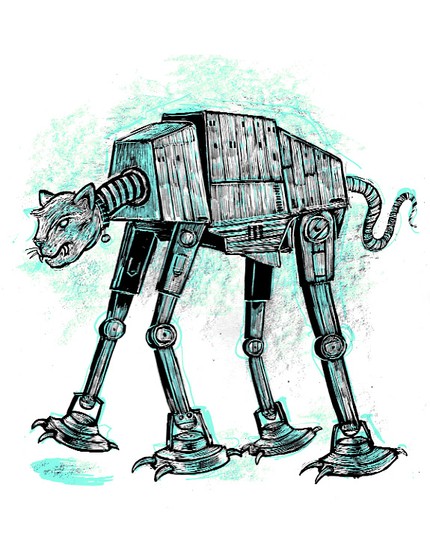 While Disney and many heavy hitters shut down anyone trying to remix their creations, it’s awfully refreshing to see George Lucas and his army of lawyers turn a blind eye to the Star Wars mash-ups that appear on what seems to be a daily basis.

Dan Grzeca’s Cat-At is beautiful and awesome and reminded me of how much I really wanted the AT-AT toy when I was a kid and needed to be shared.

You can purchase it for $20 from his Etsy store.

The decision to leave a job running a video game studio to go out on my own and make Flash games has caused a lot of my friends and peers to shake their heads.

A lot of people just don’t get it.

Flash Tactics is a series of blog posts outlining why I believe that Flash is not only a great game platform, but how I believe developers can find success on a platform that is dismissed by so many developers.

Flash Tactics Part 1: The Most Accessible Gaming Platform in the World.

For me, it’s as simple as this – no other gaming platform in the world has the install base, accessibility and reach that Flash has.

As a developer, my goal has always been to get my games in front of as many people as possible. With this goal in mind, Flash became the only real option when I decided to go out on my own.

The Flash Player install base is huge – in most markets, it’s north of 98%, meaning that for almost every player there are no barriers preventing them from playing your game. They simply have to go to a webpage and play the game.

No trips to a store, no logging in, no credit cards, no download or installs – just go to a site and play.

This sort of access is unheard of on all other platforms and it multiplies your audience by a tremendous margin.

Consider that a ‘hit’ PC game will sell 1 million units in the first year of release, before it’s removed from the shelves. Through the long tail of digital download services like Steam and D2D, you can probably tack on another 500K units sold at extreme discounts through the lifetime of the game. In addition, it’ll probably be pirated an additional 2 million times. So if you make a hit PC game, you’ll hit 3-4 million people. Not bad.

A twitter search for ‘Flash Game’ will reveal mentions of ‘classic’ flash games like Desktop Tower Defense and Fancy Pants Adventures alongside 2009 hits like Canabalt and Crush the Castle. People are still discovering these games for the first time and they are sharing them with their friends.

When most games have faded from peoples memories and sales dwindle, Flash games are still out there, building an audience for your game.

Flash is free, Flash is everywhere and new people are discovering Flash games every day.

As a game developer, this is simply too tempting an audience to pass up, and that’s why I chose Flash.

In upcoming Flash Tactics posts I will answer the second most common question I get: “How do you make money giving your game away for free?” (and I’ll try not to quote Chris Anderson’s book on the subject too much…)

[adult swim] has done it again where you can make a custom DVD of your favorite [adult swim] shows for $20. Remember when an actual DVD filled with things you didn’t want to watch cost $20?

You get 110 minutes of whatever [adult swim] shows you want. Pick the shows, pick the episodes and go to town. You can mix and match Venture Bros. with Aqua Teen Hunger Force – it’s your call.

Once you’ve got your shows lined up, you can pick the design for the case, disc and insert. Three days later a DVD filled with [adult swim] love is in the mail, on it’s way to a loving home.

And while you are at the [adult swim] store, you can get more insane bad-assery from the one television block that is so awesome, it makes me want to buy a US satellite dish.