Mochi the popular providers of tracking tools and advertising for Flash Game developers recently introduced Mochi-Coins – a micro-transaction engine that developers can integrate into their Flash games (or comics???)

As any indy creator knows – every revenue option requires some work. Ads are easy, t-shirts are harder and getting set up to process and manage micro-transactions – well, before Mochi Coins, you needed a whole team for that.

Have a song playing in the background of your movie? Let people download it for $.99. Want to see a making of video for a video game? Unlock it for $.99. People want an HD version of your webcomic? They can unlock if for $.99.

Tracking whose account has what, dealing with payments and multiple credit cards, etc – that’s all handled by Mochi.

In a brilliant showing, as Mochi-Coins grows, the developers at Mochi are keeping their ear to the ground and are addressing concerns and questions as they come up from the development scene and have addressed these in a recent blog post.

I am currently attending my first Worldcon in Montreal.

For those unfamiliar – Worldcon is the annual gathering of fans and professionals in Sci-fi and fantasy literature. These are the people who write, publish and read SF and Fantasy novels and short stories.

When con-goers first started appearing on the streets a few days ago – I saw what I expected to see. People in their 40’s and 50’s – men with walking sticks, long beards and hair that can only be described as ‘frazzled’. They were joined by women rocking pants-to-high, hip packs and long straight hair (renfair braid optional).

These people are the dedicated core of the SF and Fantasy audience. They are the people you see, all the time, in your book store and used book store. These are the people whose backs the current SF/Fantasy publishing industry was built off of.

These are the people who are worried about the future of their passions. With the print publishing industry shrinking daily – the niche and fringe work of midlist SF and Fantasy authors will soon be impossible to find unless the authors publish it themselves – and many quickly poo-poo the thought.

It doesn’t take Perception + 10 (4th Ed rules) to see that these people are worried. Very worried.

What I didn’t expect was the gap between the Hip-Packs and the the next generation of fans.

There are a surprising number of people here in their 20’s. And while most of them will score a 10/10 on the geekometer – they are also very hip. Hip to the tools and ever-changing available media platforms.

They have an energy, a lack of fear and a solid grasp on the media before them. A grasp that can only be felt by someone who can’t remember a world without e-mail.

They are meeting people in the halls who they have only met online.

They are working on bold projects and are not waiting to be discovered – they are creating works that demand attention.

The panels at Worldcon are almost exclusively manned by print publishing crowd – the old watch. Some panelists, visionaries like Neil Gaiman and Doctorow, are presenting options for the future, but for the most part, the print publishers come bearing warnings of doom and gloom.

I wonder if Worldcon would be better served by turning the tables around and having the young, self-published (or online only published) brash hipsters share their thoughts?

They are the ones who aren’t waiting for the SF/Fantasy publishing industry to recognize them, they are too busy re-inventing it.

The really hard part about making something that needs to be written, drawn, colored and scripted every week is that I don’t get much time off.  Even when I travel, I need to keep working on Petra’s Call. 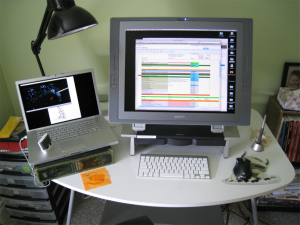 I’ve got a pretty solid routine and a great set-up at home. I sit down every morning at 5AM (yes, you heard correctly) in front of my Cintiq and I work for 2 hours and then pick up additional work sometimes in the evenings.  With the Cintiq I get to draw right on the screen – it’s great, I love it to bits.

But when I hit the road, I have to leave the Cintiq at home and swap out to a Wacom Intuos.  The tablets are about the same size as my 15″ Macbook Pro, so it all packs up quite nicely.   Working with the Intuos on the road was proving to be a bit slower than my Cintiq, which was frustrating.

I eventually figured out that it wasn’t the tablet that was slowing me down but it was the hot keys, always reaching up to my laptop keyboard took me out of the zone. Now my tiny little bluetooth Apple keyboard hits the road with me. It might seem like overkill, but Photoshop hotkeys are my best friend.
END_OF_DOCUMENT_TOKEN_TO_BE_REPLACED

OK – if you are unfamiliar with the iPhone market, let’s catch you up. iPhone = Awesome. Many games sell many copies in the iPhone app store. Everyone and their adopted dog is talking about making games for the iPhone. The iPhone marketplace is truly the wild west of the video game industry right now. Fortunes are made and lost on the App Store in your pocket.

Now that we’re past that let’s talk about the magic iPhone app store number – 99 cents.

Umm, really. That’s all I can come up with.

The simple fact is that .99 is not a lot of money. So how much game do you expect?

5 minutes? 10 Hours? There are games in the top 25 that provide both. Which makes the people who put together an addictive and satisfying 5 minute experience look like geniuses.

If you are a 4 piece band, you might make 1 album a year. It will have around 10 songs. That means the 4 musicians can make 10 songs a year. You sell these songs individually, as well as on a record, you tour and you sell stuff when you tour as well.

What if 4 developers formed a ‘Band’ and released 10 games a year? And sold each of them for .99? If they hit gold and have a game sitting in the top 10 on the App Store for a few weeks, they are going to start shopping for beach houses. That’s the App Store Model that everyone is chasing and the common sentiment in iPhone developers is “Top 10 or Bust”.

But what if games are more like music than we want to admit?

What if these 10 games that come out in 1 year followed a similar theme (gameplay, visually, story) in the same way musicians set a tone for an album? What if this developer band had a small, but dedicated fan base?

Like many bands, these 4 piece developer outfits might only be able to practice on evenings on weekends and they might never get their big break. But if they are talented and persistent, it’s really (REALLY) hard to imagine that they could not find an audience for their game. (they might be Norwegian Death Metallers, but they are an audience)