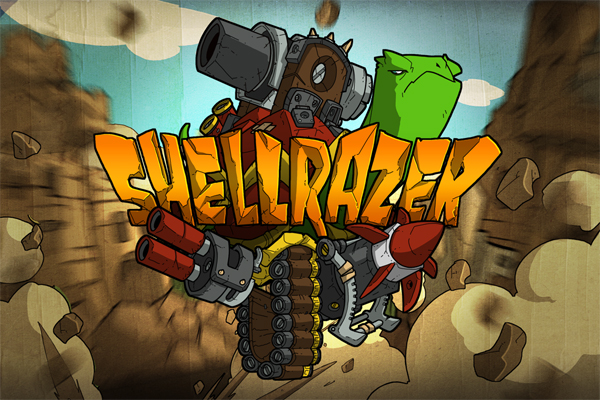 Shellrazer, the game I collaborated on with Slick Entertainment and Maple Syrup Sound, launched a week ago today.

The launch has gone great. Over the weekend, on the Paid App charts, we hit #2 in Canada, #3 in Australia and #8 in the USA. We also did great in France, Germany and many other countries.

The reviews has also been outstanding. We’ve scored a couple of perfect 5/5’s and many 4.5/5 reviews.

Overall, the whole experience has been amazing and overwhelming.

Here’s the trailer for Shellrazer. If you haven’t checked it out, you can play it on iPhone, iPad and iPod Touch here. 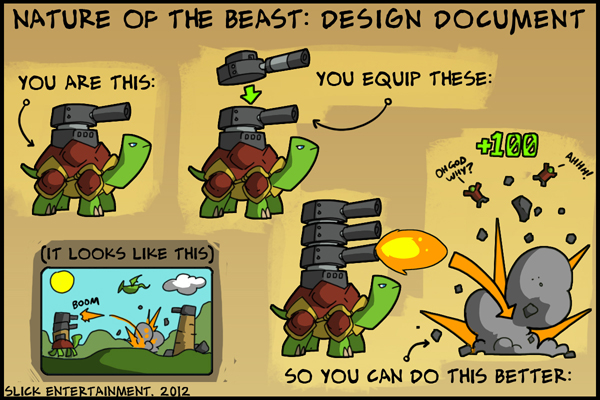 Back at the start of 2010, when I started on this weird little Ninja Robot Dinosaur indie adventure, my goal was simple: Make the games I want to make and do them solo.

Solo. For a guy who has spent 15 years making games ‘the traditional corporate way’, this may seem unusual, but it was a big part of the goal.

I like working by myself. I enjoy tackling the design, programming and art problems that come with making a game. When I’m sitting at my desk, staring at [code/a level/a sprite animation] trying to figure out how to make it work better, I am in the zone. It’s my happy place.

Nick Waanders, founder of Slick Entertainment (n+ and Scrap Metal on XBLA) is an indie developer in Vancouver. We’ve peripherally known each other for years (he left Relic the week after I joined) and became friends a couple of years ago.

The first time Nick asked me to work with him, I said no. In hindsight, I was probably quite rude about it, but, you know – I wanted to work solo.

Nick was persistent. He asked me a few more times, throwing the suggestion out whenever we got together. Then he suggested a week long jam, we got together over lunch, threw some ideas around, but nothing really came of it.

When the Global Game Jam came around, Nick and I were on the same team and throughout the weekend, Nick kept planting the seed. Even when he wasn’t saying the words, I could hear him whispering in my ear, like Vader to Luke: “Join me Shane.” At one point, I swore he told me he was my father. Whispering-in-my-head-Nick denies he said anything of the sort.

Vancouver has a monthly indie developer meet-up called Full Indie. Nick and his partner in crime, Jesse the Drawbarian, were showing people things on their phones. People were excited. I was curious.

Nick came up to me and showed me some of the visual design that Jesse had put together and Nick looked at me and asked one more time: “Do you want in on this?”.

There wasn’t a second of hesitation.

“Dude. It’s a giant turtle, with guns, who shoots things and they blow up. Let’s do this. I’m in.”